‘Doing Empathy Shakespeare’s Way’, a play and workshop by project partner Michaela von Britzke, is a challenge for inclusiveness that reframes for contemporary needs Shakespeare’s speech for Thomas More to the Evil May Day rioters of 1517 from Antony Munday’s collaborative play 'Sir Thomas More' (1603).

We want to know what you think!

Everything to Everybody is generously supported by the National Lottery Heritage Fund, and is being delivered by University of Birmingham, Library of Birmingham and a wide range of community partners.

Jenni Waugh Consulting Ltd has been commissioned to carry out evaluation on our behalf.

Please note that all individual responses are treated in complete confidence, and all views remain anonymous. All and any results from the survey will only be released in aggregated form so that no individual can be identified.

Artist and Curator Mohammed Ali – Soul City Arts has created two new graffiti murals in the heart of Sparkbrook and Balsall Heath as part of the ‘Everything to Everybody’ Project.

Created through a five-week project with pupils from Montgomery Primary Academy, Sparkbrook and Percy Shurmer Academy, Balsall Heath, with a permanent mural appearing at each school, the project has encouraged these young people to ‘Tell Your OWN Story,’ remaking Birmingham’s uniquely democratic Shakespeare heritage in the process and exploring video, poetry, manga and mural painting in a series of dynamic workshops.

The new murals tell the stories of the vibrant and diverse, communities of Sparkbrook and Balsall Heath featuring their unique narratives and local industrial history and allowing them to claim “a place in the story” (Antony & Cleopatra) of Birmingham’s pioneering Shakespeare heritage. 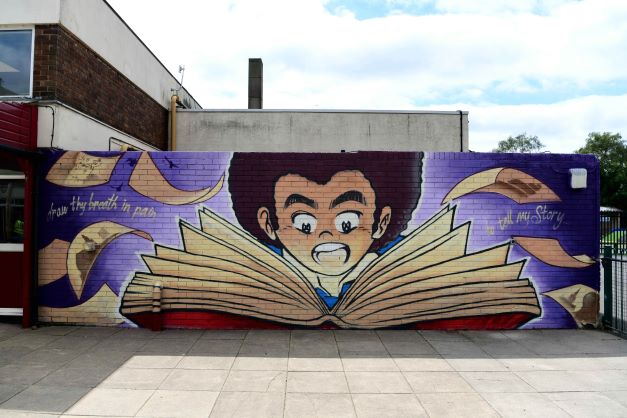 The JQRT have produced a series of films titled 'Victorian Do-Gooders', exploring Birmingham Victorians buried in Key Hill cemetery including: John Henry Chamberlain, the architect of Birmingham School of Art, Ikon Gallery and the Shakespeare Memorial Library; Robert William Dale, a preacher at Carrs Lane Church and champion of free education; Charles Vince, a staunch supporter of secular education and member of the Birmingham Education Society; the machinery manufacturer who partnered with Isambard Kingdom Brunel to launch the SS Great Eastern, Joseph Tangye; and street commissioner, Alderman and Lord Mayor of Birmingham, Robert Martineau. All played pivotal roles in the Civic Gospel movement and the creation of the Shakespeare Memorial Library, now housed in the Library of Birmingham. All 12 films can be watched on YouTube.

The films, co-funded by Creative Multilingualism, feature 140 people who live, work and study in Birmingham. Some are born-and-bred Brummies and some are delighted to be ‘honorary Brummies’. They are from all over the city and represent different ages, communities, backgrounds and, most importantly, languages.

To watch the films please visit the E2E YouTube channel

Project partner, Ex Cathedra, have launched a special Singing Playgrounds project: The Birmingham Programme is free to all Birmingham primary schools and will get your children creating their own new songs and singing games in their own languages and inspired by Library of Birmingham’s great Shakespeare collection.

The resources, which can be used at home, individually or as part of a family group, introduce children and young people to one of Birmingham’s hidden treasures, Birmingham Shakespeare Memorial Library.